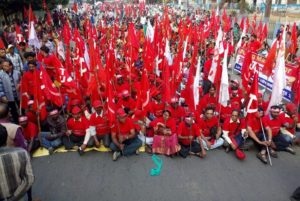 Durgapur was once known as the Ruhr of Bengal – the heart of its industrial landscape, a centerpiece of the Durgapur-Burnpur-Chittranjan belt of capitalist industry. Proximity to the coal files of Raniganj drove its industrial development, with the construction of the Steel Authority of India’s plant there in 1959 as its centerpiece. Industry anchored West Bengal’s third largest city.

If Durgapur was the Ruhr of Bengal from the standpoint of the capitalist class, it remains the Petrograd of Bengal from the standpoint of the working-class. A legendary strike ran from 10 March to 6 April 1966. The fight was over automation. The workers wanted assurances about their livelihood. This reopened on 5 August, when the workers demonstrated against the retrenchment of a construction worker. The demonstration went to the office of the General Manager, when the security forces attacked them. A CPI-M cadre – Sheikh Jabbar – died from his injuries. Another CPI-M cadre – Ashis Dasgupta – was shot by the police in the head the next day. They are martyrs of the trade union movement in the city.

Today, Durgapur is under threat. The TMC government seems in the mood to let the city drift into irrelevance – with no commitment to the workers. The furnaces are cold, the factories silent. Protest has been curtailed by a combination of government mobs and the police using violence against any attempt to hold a discussion about the future of the city. ‘To whom does our city belong?’ asks thirteen mass organisations, who have set up a Joint Platform of struggle. They are in the lineage of Dasgupta and Jabbar – people who love their class and their city. The city’s infrastructure collapses, say the mass organisations, while the municipal officers sit quietly in luxury. ‘There is no dearth of lavish arrangements for them’, say the mass organisations, but ‘this municipal board is unable to fulfill its promises of constructing houses for the slum dwellers’. There is an echo here of the Rs. 12,000 haircut given to Major General B. P. Wadhera, who was Director-in-Charge of Durgapur Steel Plant in the early 1970s. That was a small fortune in those days. Haircuts then and fancy municipal offices now are the elements of the class struggle.

For that reason, the mass organisations have been on a Long March through Durgapur from 13 November to 21 November. They have marched over one hundred kilometres. They have gathered at the Durgapur Municipal Corporation offices. The working-class of this city is on the march. It is the workers who are in the lead to save their city – preserve its democratic traditions in the name of Comrades Jabbar and Dasgupta.