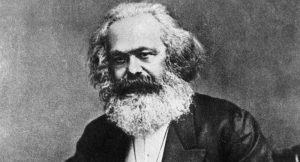 I imagine Karl Marx at his desk in the British Library, reading the Blue Books produced by the British imperial officials, studying the large books of Smith and Ricardo, spilling ink onto his coat, wondering what chaos will meet him at home. When he returns home, his children throw themselves on his bulk, demanding he read Shakespeare or the Grimm’s Fairy Tales to them. One of his children is likely sick, his wife and Helene Demuth tending to the ailing child. Marx tells Jenny Marx what he has read, and they talk about it. Her quick intelligence and wit was equal to Karl. Her intellectual contribution to his work is clear. A letter has come from Engels. He is back in Manchester, where his Irish partner Mary Burns has taught him some more about the conditions of the working-class in that industrial city. Someone is at the door. They have come to get their bills paid. The Marx household turns silent. There is no money. What Engels has sent in the letter will go towards their weekly expenses.

Out of this family of love and hunger, of flight from State repression and of hatred by the ruling elites of Europe, will emerge some of the most important books of our modern age. There is the Communist Manifesto (1848) and Capital (1867), but there are also The Civil War in France (1871) and Critique of the Gotha Programme (1875). His collected works take up 50 volumes. These are not all the work. Much remains outside them. Researchers around the world associated with a project to bring them together in a multi-language scholarly edition will work for decades yet before they can complete their project. The teaching and reading of Marx has increased over the years (Chinese Universities have Departments of Marxism). More editions of Marx’s work find themselves on-line and in print.

It was Karl Marx who produced one of the most powerful accounts of capitalism – the world system that would be able to draw in the immense creativity of social labour and turn it into private profit, that would pit capitalist against capitalist who would in turn immiserate the workers, that would turn its instability into a permanent system of repression and war. This account emerged not only in Marx’s unfinished series of books that went by the elegant name Capital, but also in his political writings and in his manuscripts (many published a hundred years after his death). Marx, drawing on classical political economy, produced its critique – turning over many of its assumptions about wealth and labour, making sure to clarify that it was the theft of time and productivity from the workers that accumulated wealth that was then used against workers. Marx showed how the worker, exhausted, went home and had to refuel themselves for another days labour. It was women who tended to male workers and to themselves, as both would go back to the factories, fields and households of the rich the next day (the largest sector of workers, Marx noted in Capital, were not in the factories, but were in domestic service). This unpaid labour – the work of healing the workers – is central to Marx’s assessment of exploitation, which would later become the basis for Socialist Feminism. What the workers produced (wealth) was held against them. What the capitalist needed – the workers – emerged, as Marx suggested, to become the gravediggers of the system.

But the proletariat is not going to automatically overthrow the system. The tentacles of ruling class ideology enter the brains of the working class and fashion a view of the world that is against their own experience of it. In struggles against their poverty and exploitation, the workers create their organisations. These organisations develop their own view of the world, which develops a proletarian consciousness against bourgeois ideology. The development of this proletarian – or socialist - consciousness would embolden more struggles. The bourgeois system, armed to the teeth, will fight back and it is in this battle that the lines sharpen: either one stands with the bourgeoisie or the proletariat. The choice leads, as Rosa Luxemburg would write, between socialism and barbarism.

Marx died in 1883. In 1848, he anticipated a world revolution in one of the most poetic books of the 19th century – the Communist Manifesto. Revolutions would occur, but those that took place did not happen in the advanced industrial world. They occurred in peasant societies – Russia, Mongolia, Central Asia, China, Cuba, Vietnam and so on. It was V. I. Lenin who elaborated Marx’s theses to show that the agricultural proletariat – the wage workers of the fields – would need to be a key ally of the industrial proletariat – the wage workers of the factories – if a revolution could take place in places such as the Tsarist Empire. Furthermore, it was theorists such as the Peruvian José, Carlos Mariategui and Soviet leaders such as Alexandra Kollantai that suggested that there could be no revolutionary movement if the ‘worker’ was not seen to have social identities that oppressed them, whether identities of being indigenous people or women. Marxism is not a static science. It has grown as struggles have taught it lessons.

The Marxist revolutions from Russia to Cuba took place in the realm of necessity, not in the realm of freedom. It was difficult for each of these new states – that ruled over regions of great poverty – to marshal the capital necessary for a leap into socialism. One of them – Vietnam – had been bombed by the United States with chemical weapons till its soil was condemned and its infrastructure was destroyed. To expect a country like Vietnam to easily transition to socialism is naïve. Each of these countries had to squeeze themselves to collect resources and they made a great many errors against democracy. But these errors are born of the struggles to build socialism. They are not endemic to it. Socialism cannot be condemned because of the errors in any of these countries. Each of these countries are experiments in a post-capitalist future. We have much to learn from each of them.

No question that Marx’s analysis, even though rooted in an earlier phase of capitalism, provides a useful analytical framework to understand our more complex capitalism – a capitalism that spans the globe, one that has withdrawn investment from industrial production to finance and a virtual economy. In this more complex system, almost a billion people cannot find work that sustains them, while those who have work find their humanity broken by their jobs. Profits race to the rich, who have ceased to pay taxation and have ceased to risk their wealth in productive investments. Social wealth, which should provide social goods, is now protected by security services and the Law as private wealth. Gated communities are the mirror image of the slums. All of this is anticipated and developed in the theorems of Marx’s massive oeuvre. It is what we read and re-read in order to better understand the harsh world that has become harsher since his death and that we read and re-read to develop our own antithesis to capitalism.

Vijay Prashad is the Chief Editor of LeftWord Books and the Director of Tricontinental: Institute for Social Research.