Letter to Our LeftWord Community (May 2017) 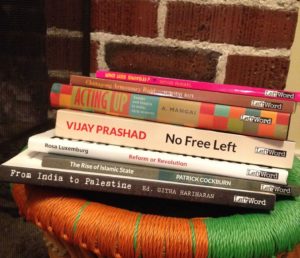 We are now in the midst of 2017 – the centenary year of the Russian Revolution. The Soviet Union, which was built after the Revolution, lasted a mere seventy years. This is far too short a time in the span of human history to make any kind of judgment about either socialism or communism.  Great strides were made, certainly, but there were also grievous wrongs. Two of our new books offer a sense of the Revolution and of the USSR:

Our list of books to commemorate the 1917 Revolution will eventually include,

Revolution! The 1917 Writings of V. I. Lenin, edited and introduced by Prakash Karat.

Selections from Alexandra Kollantai, edited and introduced by Parvathi Menon.

Krupskaya, The Woman Worker, and Other Writings, introduced by Elisabeth Armstrong.

Keep an eye out for these wonderful books.

This year is the 125th anniversary of the birth of B. R. Ambedkar, one of India’s most important political leaders. Dr. Ambedkar was the author of the Constitution of India (1950) and was one of the most important social democratic politicians in the country’s history. For Dr. Ambedkar, liberation in India could not come unless the wretched hierarchies of caste had been destroyed. Towards the end of his life, he began work on a book which he had called India and Communism. In his notes, he suggested that this book would argue that communism could not succeed in India unless the caste system is annulled. Caste, in other words, was the barrier to communism. Only a small part of this book remains. We are proud to publish the sections of the book that remain, including a very important introduction by Anand Teltumbde. In the introduction, Teltumbde charts the rift between the Communist movement and the Dalit movement, while making a spirited claim for their necessary unity in action. We hope that our readers will take up the challenge in Teltumbde’s introduction as well as find useful the framework Dr. Ambedkar set in his theory of caste as a barrier to communism.

Related to this book, we are happy to have published K. A. Manikumar’s Murder in Mudukulathur: Caste and Electoral Politics in Tamil Nadu. A slim and impressive history of a ‘caste riot’ from 1957, Manikumar’s book shows us the complexity of caste at the local level and the manner in which bourgeois politics inflames caste tension for the gains of hierarchy. It is a must-read for those who are interested in the politics of Tamil Nadu, but also for those who are interested in precisely the question raised by Dr. Ambedkar: that caste is the barrier to freedom in India.

This letter is being written on Nakba (Catastrophe) Day – May 15th – when close to a quarter of a million Palestinians lost their land in 1948. LeftWord Books has kept a singular vigil amongst Indian publishers for the national aspirations of the Palestinian people. Our most recent book archives the story of The Freedom Theatre, an important theatre company based in Jenin (Palestine). Edited by Johanna Wallin, this book has been designed with great care and skill by Sherna Dastur. While it is not a coffee table book (read this review by Komita Dhanda), Rehearsing Freedom is a beautiful work of art that should captivate the reader into the world of The Freedom Theatre.

Two of our recent books – Teesta Setalvad’s Foot Soldier of the Constitution: A Memoir – and our small book – Will the Flower Slip Through the Asphalt? Writers Respond to Capitalist Climate Change – continue to be well received by reviews and by readers. Teesta remains on the road, talking about her important book which will soon be out in a number of other Indian languages. Will the Flower was recently reviewed very favorably at Counterpunch, Business Line, and Huffington Post.