In solidarity with Teesta Setalvad 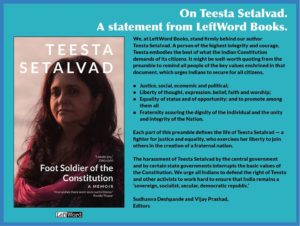 In the times when the government institutions are happily dismantling the democratic values enshrined in the constitution of the country, renowned civil rights activist Teesta Setalvad was detained by police in Varanasi yesterday. She was in Varanasi to attend a youth training camp organized by Samajvadi Jana Parishad and to deliver a speech on 'Communalism and Education'.  Teesta Setalvad, in a Facebook live, said that she had been arrested on the orders of the higher authority. On 21st September, following a molestation case that happened near a girl's hostel in BHU (Banaras Hindu University), the girls of the university protested and staged a Dharna on the university campus for better safety measures in the campus area. The protest was violently curbed by the University administration with the use of brute force. Many political and civil rights groups condemned the actions of VC and demanded a response from the government and the resignation of the VC. After detaining Teesta Setalvad, the police wanted her to give in writing that she won't support the movement of BHU girls. This is not the first instance that the governments have harassed activists to force them to fall in line. We are proud publishers of Teesta Setalvad's memoirs, 'The Foot Soldier of the Constitution'. We stand in solidarity with Teesta Setalvad because she stands for everything that's right about this country.

A statement from LeftWord Books:

We, at LeftWord Books, stand firmly behind our author Teesta Setalvad. A person of the highest integrity and courage, Teesta embodies the best of what the Indian Constitution demands of its citizens. It might be well-worth quoting from the preamble to remind all people of the key values enshrined in that document, which urges Indians to secure for all citizens,
Justice, social, economic and political;
Liberty of thought, expression, belief, faith and worship;
Equality of status and of opportunity; and to promote among them all
Fraternity assuring the dignity of the individual and the unity and integrity of the Nation.
Each part of this preamble defines the life of Teesta Setalvad - a fighter for justice and equality, who exercises her liberty to join others in the creation of a fraternal nation.
The harassment of Teesta Setalvad by the central government and by certain state governments interrupts the basic values of the Constitution. We urge all Indians to defend the right of Teesta and other activists to work hard to ensure that India remains a 'sovereign, socialist, secular, democratic republic.'