"I have forever been a ‘devil’s advocate’" 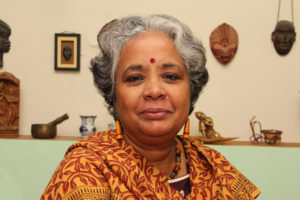 An Interview with A. Mangai, author of Acting Up: Gender and Theatre in India, 1979 Onwards

A. Mangai is the pseudonym of Dr. V. Padma, who teaches English at Stella Maris College, Chennai. She has been actively engaged in the theatre for close to three decades. She writes bilingually in Tamil and English and is also a translator. For LeftWord Books, Mangai has written Acting Up: Gender and Theatre in India, 1979 Onwards.

In The Hindu, Sruthi Krishnan says of the book that it ‘does not offer an overarching theory on feminist theatre, nor does Mangai impose a singular narrative. Such an approach allows readers to form their own interpretations. A spirit of dialogue underlies the book; a dialogue that will hopefully continue long after the last page has been turned’.

In The Wire, Niharika Mallimadugula writes, ‘Despite being largely a scholar endeavour, there’s a sensitivity of description and a personal involvement from Mangai, both as a teller and participant in the world of theatre, that makes the book relatable and provoking’.

Could you tell us what drew you to the theatre?

It was AIDWA and Progressive Writers’ Association, the women’s and cultural wings of CPI (M) that drew me to the theatre. What began as one of the activities for these groups became a discovery that theatre is the medium that grips me! I found it democratic in the process, collective in aesthetics and absolutely participatory as a product.

In The Hindu, Shruti Krishnan says that one word defines your book – self-reflexive. This is an astute observation. The book is after all the work of a theatre person whose lives winds through the narrative. Could you talk a little about the experience of writing such a book?

I think that review also mentions the ‘dialogue’ the book attempts to have…I have forever been a ‘devil’s advocate’.  At an activists’ meet, I would argue for artistic efforts; at an artists’ meet, I would voice the concerns of the activist and the academic. Though it sounds heavy the activist, artistic and academic lives do overlap in my mind, in the ways I function. I know it feels quite messy but I guess that’s reality.

The main mood while writing the book was one of responsibility for all the accounts I am bringing together of so many theatre practitioners, most of whom are also friends.  To me, it is one version of ‘our story’. These women have been drawn into the theatre so seriously that their whole life revolves around it.  I think we should have recognized this trend at least ten years ago! But better late than never.

We, namely two of my group members, Revathi and Ashwini and myself, have just returned from a production workshop at Batticaloa, Srilanka. It is the 25th year of Suriya, the women’s group with which I have been associated with from 1998 onwards. We titled the play ThuyarMaruppom (Let's Reject Sorrow), a line from one of their poems. Taking stock of the past in this post-war period, looking for healing and energy to move on. Sharing and empathy form the crux of the play. Objects such as lamps, a clothesline, shorts, a spade and coconut scrapper tell the stories of the people.  I liked the distance these objects provide to the stories. Also, these are witnesses, of everyday life and historic calamities.

It always puzzles me why we are not able to talk about the Sri Lankan Tamil issue, not even as much as we do Palestine, for example.