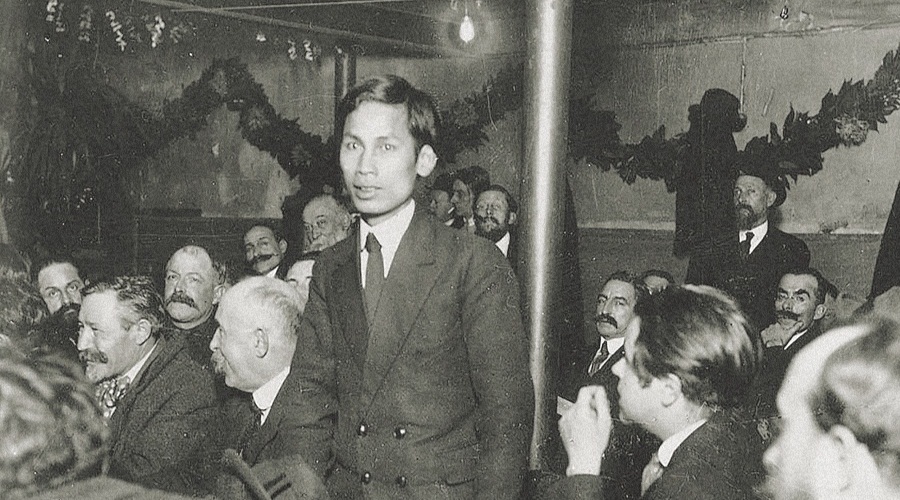 Tomorrow, 19 May 2020, is Comrade Ho Chi Minh’s 130th birth anniversary. Vijay Prashad speaks about what Comrade Ho meant to the Vietnamese people and their revolution; to the task of creating a socialist society in a country destroyed by thirty years of war imposed by imperialism, on land ravaged and poisoned by conventional and chemical weapons; and on how Vietnam has responded to the global pandemic, Covid-19, with a scientific and human approach.

Below the video is a transcript of the talk.

[Tomorrow] is Ho Chi Minh’s 130th birth anniversary. Born in 1890, Ho Chi Minh left his country at age 21 to become a revolutionary. He travelled through Marcus Garvey’s Harlem, Lenin’s Moscow and Clara Zetkin’s Paris. At the Fifth Congress of the Comintern (1924), Ho Chi Minh foreshadowed his role in Indochina. ‘The revolt of the colonial peasants is imminent. They have already risen in several colonies, but each time their rebellions have been drowned in blood. If they now seem resigned, that is solely for lack of organization and leadership. It is the duty of the Communist International to work toward that union.’ Ho Chi Minh exercised a major role in uniting the left Vietnamese fractions and forging the party that would lead the liberation movement. Whether in prison or in his forest hideout, or later in Hanoi as the US bombers tried to destroy Vietnam, he remained steadfast in his commitment to his people and to their ultimate aim: for a free and socialist Vietnam.

It is fitting on his birthday to remember not only Ho Chi Minh, but the millions of people of Vietnam who sacrificed their lives against imperialism and for socialism. I have in mind a revolutionary couple – Le Hong Phong (known as The Red Wind), secretary of the Party’s Central Committee, and Minh Khai, Secretary of the Saigon Party Committee. They had been in the USSR when they had a child – Hong Minh, Red Aurora, the red northern lights, named in honour of the USSR. In 1938, the police arrested Le Hong Phong and Minh Khai; their last meeting was in the Saigon prison. On 24 May 1941, the colonialists executed a large part of the party’s Central Committee, including Minh Khai. Her last words were, ‘Long Live the Communist Party of Indochina! Long live the Soviet Union!’ In her prison cell, she had scratched a message on the wall, ‘I’m not worried about myself. All my thoughts are about saving the Party.’ Her husband was tortured and died a year later. He told his cellmate before he died, ‘Comrade, tell the Party that I, Le Hong Phong, was true to our revolutionary cause to my last breath.’ These were the members of Ho Chi Minh’s Party; it would be people like them who would resist the French and the Japanese, and eventually the United States of America.

Listen to nine short poems from Ho Chi Minh’s ‘Prison Diary’, read by Sudhanva Deshpande; art by Virkein Dhar. These poems were written during 1942–43 when Comrade Ho was imprisoned in southern China by Chiang Kai-shek’s government.

When I think of Ho Chi Minh, I think of steadfastness and sacrifice, of a people who had to face the most powerful war machines, whose lands were bombed with more ferocity than used in any previous war, and yet who prevailed against everything imperialism threw at them. Sadly, when Vietnam won its freedom – first in 1945 and then in 1975 after thirty years of war imposed upon it by the imperialists – the Vietnamese people inherited a country destroyed by chemical weapons and by war over generations.

From 1945 onwards, Ho Chi Minh spent much effort trying to build institutions out of the air, teaching his comrades about the need for ‘collective mastery’ of social life. Vietnam remains a small independent country that ploughs the tough terrain of human society toward socialism. As Vietnam was struck by the coronavirus, its people and government would have made Ho Chi Minh proud: they took a science-based attitude to the virus and disease, they mobilised public resources and took public action, and they demonstrated their internationalism by sending protective equipment even to the United States of America.

In one of his poems, Ho Chi Minh wrote of a national hero, Quang Trung:

He had will-power
He had a mighty brain
Besides, the people
Gathered under his banner.

Comrade Ho Chi Minh could well have been writing of himself. We are still under his banner.

Featured image: Ho Chi Minh at the founding conference of the Communist Party of France in Tours (December 1920). Source: Red Star Over the Third World (LeftWord, 2017).