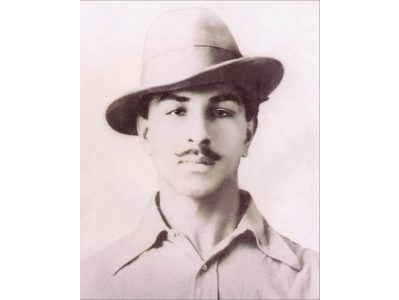 Bhagat Singh was born on 28 September 1907 in Lyallpur district. At the age of 12, Bhagat Singh bemoaned the massacre at Jallianwallah Bagh. It would impact him for his entire life. In March 1926, Bhagat Singh formed the Hindustan Naujavan Sabha. In 1928, now with the Hindustan Socialist Republican Association, Bhagat Singh shot John Sanders, a British imperialist police officer. Bhagat Singh and Batukeshwar Dutt threw bombs and leaflets into the Central Legislative Assembly and turned themselves into the police. For two years, Bhagat Singh was in prison. Here he wrote a notebook, which was later edited and annotated by the literary scholar Chaman Lal and published by LeftWord Books as Jail Notebook and Other Writings. Bhagat Singh was executed in 1931.

LeftWord Books asked Professor Chaman Lal, who retired from JNU, to reflect on the heritage of Bhagat Singh in honor of his birthday.

The British killed Bhagat Singh in 1931. His legacy since then has been claimed by many different political formations. I remember how the Khalistani movement also claimed him. When did the Hindu Right decide to start claiming Bhagat Singh?

The Hindu right was very much part of the Congress movement prior to 1947. During that period also, Madan Mohan Malviya, Purshotam Das Tandon, and others had links with revolutionaries, but without acknowledging the revolutionaries’ radical social transformatory ideas. While Nehru and Subhas Bose were impressed more by Bhagat Singh’s socialist zeal and appreciated and connected to that, the right wing wanted and tried to confine them to their own idea of ‘nationalism’ symbolized by ‘Bharat Mata ki Jai’! Bhagat Singh and his comrades had moved from ‘Vande Matram’ to ‘Inqilab Zindabad’ (Long Live Revolution) and ‘Samrajyavad ka Naash ho’ (Down with Imperialism) – both International working-class slogans. Jawaharlal Nehru himself an admirer of Soviet Union at that time even wished to send Bhagat Singh to the Soviet Union at his own expense for training him in socialist ideas, that was not to be as neither Bhagat Singh wished to leave nor conditions of those days allowed such a journey!

Post-partition the RSS-led Hindutva organization tried to appropriate all the revolutionaries in their own ‘perception’ and Bhagat Singh family’s Arya Samaj background and some members of surviving family of Bhagat Singh associating with Jan Sangh party, an offshoot of RSS and precursor of today’s BJP, helped in that. Khalistanis too tried to appropriate Bhagat Singh, but they were not too enthusiastic about it as the atheism of Bhagat Singh, much asserted by that time, was a block for them, though they did try to say that ‘Why I am an Atheist’ was interpolation done by ‘Communists’ later, without realizing that this seminal essay was published as early as on 27 September 1931 by The People of Lahore, a paper set up by Lala Lajpat Rai and not by any leftist!

In his last text, Bhagat Singh wrote - ‘Social reconstruction on new, i.e., Marxist, basis’. What was the extent of his exposure to Marxist writings?

Bhagat Singh’s Jail Notebook and memoirs of his comrades throw light on this question very clearly. The fact that that there are a number of references to Marx, Engels, Lenin and Trotsky’s writings in the Notebook and most of them are in a favorable light, shows the influence of Marxism on his developing Marxist personality. His close comrade Bhagwan Das Mahaur in his memoirs had referred to the copy of Marx’s Capital being given to him by Bhagat Singh for reading, though he was not able to understand it. Shiv Verma and others have referred to the books read by him and passed on to other comrades for reading. A letter from jail to his friend Jaidev asked for books on the Punjab peasantry and Marxism. Rajaram Shastri, the librarian of Dwarkadas library of Lahore set up by Lala Lajpat Rai, had mentioned in his memoirs that Bhagat Singh would eagerly read books coming from the Soviet Union in those days. He sent a number of such books to Bhagat Singh while he was in jail. Given the time frame of 1923-31 and restricted flow of Marxist books, it is amazing to see how Bhagat Singh got hold of most of the important books on Marxism, including those of Marx and Lenin. In his last moments before his execution, Bhagat Singh was reading Lenin or about Lenin. He demanded that his lawyer Pran Nath Mehta supply him that book on the morning of his execution on 23 March.

The iconic status of Bhagat Singh reminds me of the iconic status of Che Guevara. Both appeal to young people. Not four years after his death, the Director Intelligence of the Raj, Horace Williamson wrote, ‘His photograph was on sale in every city and township and for a time rivaled in popularity even that of Mr. Gandhi himself’. What is it about Bhagat Singh that remains so powerful for the Indian youth after all these years?

It is true that Bhagat Singh fascinates and is taken up as a hero to not only by Indian youth but also youth abroad. Not only Horace Williams but even Pattabhi Sitaramiah – the Gandhian historian of the Indian National Congress – wrote that Bhagat Singh was ‘as popular as Gandhi’ in his history! More evidence of his popularity is amongst Pakistani youth and others who claim that he was born and martyred in Pakistan so that he belongs to ‘us’! Even in academia, Bhagat Singh is now being researched in Australia, UK, and other Universities. Kama Maclean of the University of New South Wales (Australia) has a book out from Hurst (UK) and Penguin (India) on Bhagat Singh. Chris Moffat of Queen Mary College (UK) has done his Ph.D. on Bhagat Singh. Many more researchers are now interested in Bhagat Singh and revolutionary movements in India and abroad, which actually is somewhat surprising as among Indian academia, only Bipan Chandra took interest in studying Bhagat Singh in the 1970s and it did not go much further even in JNU, where the first historic Bhagat Singh Chair was set up in 2008 and which still remains non-functional! Perhaps the present political scenario and recent JNU student movement have forced Indian political groups and academia also to look towards Bhagat Singh, not just as a romantic hero, but as a thinker-revolutionary in the same way as Che Guevara is seen. More attention should be paid to Bhagat Singh’s writings. Che Guevara is also seen as a hero due to his writings and his actions, not just because he is a ‘romantic revolutionary’!

What drew your interest to Bhagat Singh, to move you to work on his for so long?

I was as fascinated as any Indian in his or her adolescence by the life of Bhagat Singh. Reading Manmathnath Gupt’s Bharat Ke Krantikari – sketches of sixteen or seventeen revolutionaries made me more attracted. I translated this book in the early 1970s into my mother tongue - Punjabi – which was serialized by the legendary Ghadarite Baba Gurmukh Singh in the fortnightly Desh Bhagat Yaadan, which was published from the Ghadar Party Memorial Hall in Jalandhar. Though by inclination and later as a profession I was a student of literature, particularly the Hindi novel, my interest in revolutionaries never faded. So along with my interest in literature, I continued to study revolutionaries’ memoirs and Bhagat Singh’s writings, which started re-emerging from the 1970s in many Indian languages.

My Ph.D. from JNU was on Bhagat Singh’s comrade in his college days – the writer Yashpal. Bhagat Singh had advised Yashpal to write stories and pamphlets rather than to throw bombs, as he did at the Viceroy’s train in 1929. My abiding interest in Bhagat Singh and his world led to my work and the subsequent publication of Bhagat Singh’s documents. This began in 1986 and went to 2004 – when I completed editing and annotating Bhagat Singh’s Jail Notebooks for LeftWord Books. After re-joining JNU’s faculty in 2005 till retirement in 2013, I paid more attention on Bhagat Singh than on literature, which continues till date!

What is the aspect of Bhagat Singh’s life that most surprises you? Something personal, something idiosyncratic?

The most fascinating aspect of Bhagat Singh’s personality was his friendliness towards everyone, particularly towards his comrades, which made every one of them feel that ‘Bhagat Singh was his close friend ’- be it Azad, Sukhdev, BK Dutt, Bejoy Kumar Sinha, Jaidev or Jatindas. In fact, Jatindas died in Bhagat Singh’s lap on 13 September 1929 after sixty-three days of being on hunger strike. Bhagat Singh was a cheerful lad, full of passion for life. He took part in the drama society in his college. His acting was appreciated by none other than the nationalist poet Sarojini Naidu who had watched his play! Bhagat Singh loved films – he saw Uncle Tom’s Cabin and Charlie Chaplin films.

From a milkman, he could buy the whole bucket of milk to drink and do so in minutes. They would play all kinds of pranks as he and Sukhdev would go to their friend Rajaram Shastri, who had just one cot in the room and they would lie down on both sides and crush him to make him leave the cot and go to sleep on the ground! There are a number of such fascinating stories in the memoirs of his comrades. He learned English by keeping a small dictionary in his pocket. Once his friend Jaidev said he could not go to the film because he had ‘dyspepsia’. He hoped the high-sounding term would put off Bhagat Singh. But Bhagat Singh checked his dictionary, found that ‘dyspepsia’ was merely minor indigestion, patted Jaidev on the back and marched him off to the pictures. There was a high degree of comradeship among them.