Getting to know the ‘Bolsheviks’ 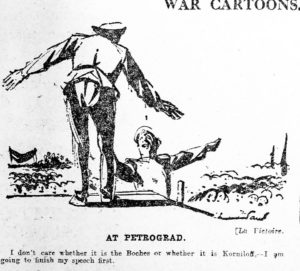 In the cities of colonial India, caught in the vortex of war-time/post-war scarcity and political repression, how did the colonizers and a segment of their literate middle-class subjects perceive and depict the Bolshevik Revolution through newspaper pages?

In the course of November 1917, the colonial world became gradually acquainted with Bolshevism through hostile news networks based in the West.

In Kolkata, the former capital of British Empire in India until 1912 and the provincial capital of colonial Bengal, the news of the revolution was circulated by The Statesman, a leading English daily with regular foreign pages and a loyal European readership. On 4 November 1917, The Sunday Statesman reprinted a cartoon depicting the Petrograd revolutionaries as impractical speechmakers, oblivious to the war raging around them; this was an indirect reference to the anti-war position of the Bolsheviks and winning slogan of ‘peace, bread, and land’. In another cartoon, the ‘New’ Russia was projected as an unsophisticated country-bumpkin. A rustic soldier, he was precariously walking on a tightrope from Czarist autocracy to liberal (bourgeois) democracy; at the risk of losing his balance at any moment, he could fall into a chaotic revolutionary abyss below. Six days later, the news of a ‘Maximalist’ capture of power hit the headlines. Hourly news bulletins in the form of telegrams were sent from Petrograd by Reuters to London during 7-8 November. These, in turn, became the earliest vehicles describing the rapidly unfolding events of the Russian revolutionary calendar.

The Reuters’ correspondent reported that naval forces under ‘Maximalist’ (meaning majority/Bolshevik) control had occupied the banks, the central telegraph office, the Russian news agency office and the naval palace, the seat of Kerensky’s provisional government. ‘No disorder was reported’. Lenin, the Maximalist leader, the accounts claimed, had given a call for immediate peace and Armistice. During the next 19 days after 10 November, newspaper descriptions and journalistic interpretations from British sources stressed that the new government consisted of ‘Hun’ agents (‘Hun’ being the popular xenophobic war-time term to refer to the Germans as violent, marauding hordes).  The Russian revolutionaries were seen as criminal traitors who have betrayed British imperial interests by pulling out of the war and attempting to negotiate peace with the Kaiser Reich. British journalists presented the ‘social’ character of the revolution as repugnant, ludicrous and setting dangerous precedents as far as proprietor interests were concerned.

According to them, this was evident in the conventions of councils of workers, peasants, and soldiers to discuss policy and mobilize in support of the revolution, adoption of a land redistribution programme and proposed a reduction in the size of the army to enable the transition to a peaceful, military conflict-free life. The unbelievably shocking novelty of a ‘subaltern’ appointed as ‘Generalissimo’ was registered. ‘Extreme excesses’ unleashed by factory-hands were vaguely mentioned and remained unexplained. Incredulous and brief reports on a world turned upside down was accompanied by optimistic news of an imminent debacle for the revolutionaries in power and the assured victory of Kerensky’s forces. By the end of November, these prematurely hopeful predictions of a restoration of the Russian bourgeois allies to state-power were dashed. Journalists glumly reported that Kerensky had resigned and proved to be a ‘tragic failure’ while the Bolsheviks were conspiratorially engaged in a vile ‘peace-plot’ with the Germans.  From 1918, the word ‘Bolsheviks’ came to replace ‘Maximalists’ and ‘anarchists’. These terms were in general use and deployed loosely by the western ruling classes and the newspapers they controlled during the revolutionary upheavals of November 1917 when the precise political programme and methods of the revolution’s organizers were still unclear to them. ‘Anarchists’, and even ‘Maximalists’ (which was a close translation of ‘Bolsheviks’), were substituted in the imperial lexicon as the magnitude of what constituted October 1917 in Russia inexorably sank in and terrified the empires of capital.

In 1918, immediately after the First World War ended, a second front was opened against Bolshevik Russia by the victorious allied powers including Britain, United States, France, Japan, Italy and Poland. During 1919-20, the Russian Civil War raged between the White Armies and Foreign troops on one hand and the Red Army on the other. A paper and speech war on Bolshevism was launched simultaneously. This was also a period of strike actions by workers across the world and an explosion of anti-capitalism in the metropolitan countries and anti-imperialism in the colonies. The major urban centres of the colonial world became cities of protest. Mass movements erupted from the streets of Cairo to Shanghai. In Indian cities, the bottled up opposition towards the British Empire, and views of the local white communities as represented by The Statesman in Kolkata, were uncorked in a post-war climate. The anti-establishment political environment encouraged many intellectuals and activists to show sympathy towards the Bolsheviks. Alienated by and critical of authority, they stood at the crossroads of existing and emerging anti-imperialist currents. Although neither coherent nor organised, their perspectives on Russia were interpreted by the colonial administrators as a potential left tendency.

In the course of the Russian Civil War, fought during anti-colonial mass upsurge in the form of Khilafat and Non Cooperation Movements and the strike-waves in and around cities, interest and support towards Bolshevism increased. From 1920, the White troops and their Allied champions met with military reverses in Russia; talks were proposed and initiated in London with Bolshevik representatives by the Lloyd George Government.  The local press in Indian cities during 1920 thus came to feature numerous articles and discussions on Anglo-Russian relations, the content of Bolshevism and its representations by the British authorities. The revolution was typed, telegraphed, printed and distributed. Reports on the progress of the Russian Civil War were published. Analysis and predictions were made on the outcome of the talks between the Russian Trade Delegation and the British government. The British Foreign Office and the colonial authorities were lauded and criticized for their ultra-cautious approach to the ‘Bolshevik threat’ over India. While European and loyalist Indian newspapers championed the government positions, guarded and sharp dissatisfaction were expressed in many weeklies and dailies.  Condemnation of the government was combined with support for the emergent trade union militancy.

The Mohammadi (Kolkata) deplored the policy of the British authorities to spread panic in the name of ‘Bolshevik Menace’ and the imaginary threat of a Russian invasion through Afghanistan. The paper criticized the tendency of the government to project the ongoing labor strikes as acts of sabotage by Bolshevik spies and emphasized that they were the products of hunger.  Bolshevism was also seen as a symptom of people’s power spreading across the world. Paisa Akhbar (Lahore), which showed a mixed response to Bolshevism, referred to the support and influence achieved by the worker’s parties in England, Ireland and Italy which have refused to allow the passage of arms and ammunition to Poland and assist the Polish offensive against Russia; the paper regarded the exercise of authority by common people from below as the ascendancy of democratic forces; it made a veiled reference to the weakened condition of colonial authoritarianism when it declared that this was an age where state absolutism had become outdated. The futility of the intervention by allied powers in Russia was also highlighted by others; they focused on the material consequences of the civil war. The Bombay Chronicle ridiculed the allies and Britain for persuading a bankrupt country like Poland to fight the Bolsheviks.  The Independent (Allahabad) opposed the economic blockade imposed on Russia and the continuing war mentality of the big powers.

Finally, Bolshevism entered an urban dreamscape. As a tongue-in-cheek Utopian vision it erased the interlinked webs of scarcity, artificial price rise, wastage of resources wrought by profit-making, poverty, exploitation and culminated in dismantling class and caste apartheid; this was laced with ironical observations on life under the Raj of colonial capital. The Hindu (14 July 1920, Hyderabad, Sindh) printed an imaginary dream sequence on the effects of Bolshevism in Karachi. The anonymous author/dreamer narrated that before the incidents mentioned in his dream took place, he had never heard or read anything about the Bolsheviks. When he came to know that the Government was condemning them as bad men and was against them, he became afraid. He then journeyed to Karachi in order to obtain a ‘charm’ for self-protection against their attacks. He was baffled by the unfolding scenario:

‘At the Cantonment Station, I saw great heaps of old railway material-rails, sleepers, trucks and engines. On inquiry, I learned that the property belonged to the North-Western Railway, who had destroyed it to prevent the Bolsheviks, who were coming, utilizing it.  I was puzzled by hearing the name ‘Bolsheviks’ but was glad at the wise action taken by our Government in destroying all this material. Just then I heard an aeroplane overhead and was told that the Bolsheviks are coming by air and that our planes are going to intercept them, I cried out, and commenced to run towards the Cantonments where I saw a curious state of affairs; changes were being made in the shops, sign board painters were at work preparing new boards with the words ‘‘Articles sold at Cost Price’’, ‘‘What is profit? We do not know what profit is.’’ ‘‘The people have no concern with the shop, it belongs to the State.’’

Articles were being sold dirt cheap, the high prices of Elphinstone Street had vanished. There was no haggling, people were coming and purchasing articles at cost price. Not only these changes were evident, I saw servants, who hitherto had been looked down upon and wore dirty clothes, wearing good clothes. I asked in a whisper where they had attained these good clothes from and learnt that the Sahibs had given them, saying that they were no longer their servants but their partners and would be treated with respect. On reaching the school I noticed a crowd of boys, sweepers, chambers, and Koris, all had come to be educated, no fees were charged, all books were supplied free, and milk was given free to the boys once a day. I saw several men going to the Cinema where no tickets were being asked for. The Police force had been disbanded, all the men having been sent to their homes. No complaints were received from the town. I was quite bewildered. I boarded a train and was not charged a pie as fare; at the docks, a boat was ready, on which I noticed the staff of the Daily Gazette and Sachai. The Editor of the former on seeing me cried out the Bolsheviks had come and would trouble me...The boat then whistled and I woke up.’

The author finished his newspaper feature with the words: ‘The Truth or falsity of this is known to God.’ The promise of an epochal transformation held out by his ‘dream’ did not end there.