Frankenstein and the Monster 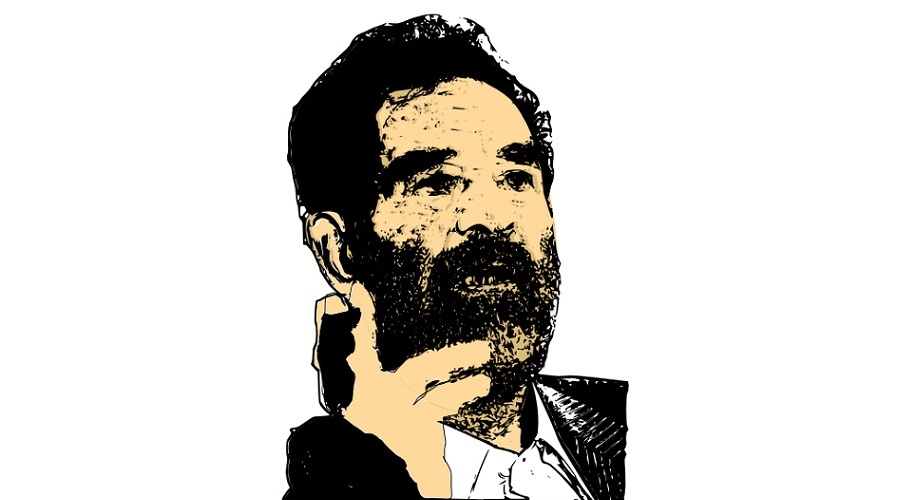 The note we share today was written by Aijaz Ahmad as an added preface to his Iraq, Afghanistan and The Imperialism of Our Time (LeftWord, 2004). Saddam Hussein’s capture was touted as a big win for the forces of freedom by the international press. The author, however, advises caution. The trial by an Iraqi court was going to be, as it did turn out to be, a sham. And though Hussein was a mass murderer himself, there was an even bigger monster than him.

Saddam in US Captivity

On 14 December 2003, a day before this book was to go to press, the Anglo-US occupation authorities announced that they had captured Saddam Hussein the evening before and the TV networks, notably CNN and BBC, the two principal echo-chambers of the empire, took to dutifully showing the footage of his humiliating dental examination over and over again, for hours on end, ritualistically, pretty much as they had shown, in infinite repetition, the falling of the Twin Towers of the World Trade Centre on 11th September 2001 and for some days thereafter, so as to fix a certain image in the minds of the TV-watching world: progress from American tragedy to American triumph, in just over two years, and from the majesty of those tottering towers to the hapless surrender of the man the US has been demonising as the most gruesome of the demons behind all things Arab and Islamic. In the political unconscious of the US public these two images undoubtedly got intertwined, in an eternal battle between Good and Evil. For much of the rest of the world, hours and hours of this televised spectacle of an exhausted, lonely, elderly, dishevelled captive by the greatest imperial power on earth was simply disgusting.

Saddam’s daughter in Amman and his sister in an unnamed Arab capital had identical, and highly plausible, reactions in their respective interviews: Saddam seemed drugged. For all one knows, he might have been tortured. They demanded that he not be tried by either the occupiers or their puppet regime in Baghdad. Both demanded trial by a competent international authority while the daughter, Raghad, announced that the family shall soon be appointing a lawyer to defend her father.

CNN and BBC showed miserable little groups in Baghdad celebrating and individual shopkeepers firing their guns in jubilation. They did not show the many pro-Saddam demonstrations that erupted throughout northern Iraq right under the guns of the American occupiers. In one such demonstration, US soldiers killed three Iraqis.

By any standards of international law, the American occupation of Iraq is illegal. Any trial of Saddam in a court with international jurisdiction would bring up the question not only of his crimes but also the legal status of those who have held him in captivity. Such a trial may turn into a trial of the lawless occupiers and their war crimes. Knowing this, Bush and Blair announced quickly that the trial shall be held by an Iraqi court and pointedly excluded any role for the UN. Everyone knows that such a court shall be beholden to the Americans and their puppets in the so-called Iraqi Governing Council (or whatever is put in its place in the coming months), and that it would sentence Saddam to death. To circumvent this foregone conclusion, Kofi Annan, the UN Secretary General, immediately went on record demanding trial by a competent international court and, in keeping with the extremely widespread European sentiment, he refused to condone any proceedings that would include the possibility of death penalty. The UN has never set up a court which carried the death penalty, he said, and ‘as Secretary General … I am not going to turn around and support a death penalty’. He clearly had in mind something resembling the Hague tribunal where the former Yugoslav head of state, Slobodan Milosevic is currently on trial.

This puts in perspective the uses of Saddam Hussein captured alive rather than dead by his own bullet or someone else’s. Much moral indignation has been expressed all around, from Right to the Left, about Saddam’s ‘cowardice’ in not killing himself instead of allowing himself to be captured. He probably is a coward; tyrants usually are. But that’s not the issue. In eluding the Americans for eight months, on his own soil, despite all the American gadgetry which sees through mountains and oceans, Saddam has proved that even an individual, stripped of all his powers, can resist; and he can do so because he is among his own people. Second, corpses cannot speak for themselves, especially when enemies of the dead man have custody of the corpse; a living person has at least a chance of speaking, if he can survive the torture which Saddam is likely to be facing, now and in the months to come. Battle over the modalities of his trial shall keep alive the whole issue not only of his rights but also, crucially, of those who occupied his country barbarically and now hold him captive; he may have some rights, they have none, if the letter of international law is observed. Triumphant tyranny of imperial proportions putting on trial a local, broken tyrant who may yet tell the tale of the profound collusion between these two tyrannies, the American and the Ba’athist, can be a chastening drama for the world to watch. I would rather hope that the Americans fail to break Saddam’s will entirely, and that in exposing himself he also manages to expose the crimes of his prosecutors who were for long his benefactors and then turned against him only when their own interests began colliding with his ambitions.

For that reason, there should be an international movement for the protection of Saddam’s rights as a prisoner of war, his right to a lawyer, his right to immediate and continuing access to the Red Cross and other agencies which are internationally entrusted with the duty to make sure that prisoners of war are treated in accordance with the Geneva Conventions and the Hague protocols. We need a healthy, defiant Saddam in open court, for reasons not narrowly moralistic but profoundly political which are then subject to a much more complex understanding of public morality.

In the process, we should avoid two mistakes.

One, we should never trust the Anglo-American version of events. They say that Saddam was captured on the evening of 13th December 2003, that he had $750,000 dollars but not even a radio or any other communication equipment, that he had a loaded pistol which he did not use, that there were two AK-47 rifles and two men who tried to run away without using those rifles, that Saddam was living in what they call a ‘spider hole’ – and they have given gory, rather implausible details of the conditions in which he lived in and around that ‘hole’. Maybe, maybe not; all of it may be true, or some of it, or none. Only time will tell, and that time may not come for quite a while.

Second, one ought not forget even a little of the sort of monster Saddam Hussein is and has been for over forty years. His career as an assassin – and an assassin of communists in particular – began early, and began, appropriately enough, with his killing in 1958 of a brother-in-law who was a communist. Before finally capturing him in 2003, Americans ‘captured’ him early, in 1959, when he was recruited into a squad to assassinate Gen. Kassem, the progressive anti-monarchist who was accused of being close to Iraqi communists (for the US, radical third world nationalism is ‘communist’ by definition). He participated in all the coup attempts between 1963 and 1968 which the US sponsored and the Ba’athists carried out, and in which the Ba’athists killed communists – based, in part, on information provided by the CIA. After the last of these coups, in 1968, which led to continuous Ba’athist power until 2003, Saddam took charge of internal security and created the institutional framework of the dictatorship; the question of Israel was the only point of friction between the US and the Ba’athists even though, unlike Syria or Egypt or even Jordan, Ba’athist Iraq never fought a war with Israel. For the rest, Saddam remained a close ally of the US upon whose promptings he invaded Iran in 1980, in a savage war which cost the two countries a million lives and in which the US-UK alliance supplied him with satellite photographs, equipment and weapons, including the capacity to manufacture chemical weapons (and use those weapons against Iran). The US turned against him only after he invaded Kuwait and threatened Saudi Arabia, the monarchies the US loves next only to Israel. If Mary Shelley were to write the story of the love-hate relation between the US and Saddam, she would probably call it ‘Frankenstein and the Monster’.

Finally, how significant is the question of Saddam’s arrest for the foreseeable future of the Iraqi resistance? The short answer is: not much. I wrote immediately after the capture of Baghdad, and I have never tired of saying, that the removal of the top echelon of the Saddam regime is a precondition for the real emergence of a national liberation struggle in Iraq. From inside the Iraqi army and the Ba’ath party, resistance was always more likely to come from the middle-ranking officers and the rank-and-file, not the predatory top. Equally important is the fact that most groups currently engaged in resistance seem not to have arisen from among even those elements; many are secular nationalists, leftists and Islamicists. Various groups either operate autonomously or cooperate for patriotic reasons, against a common enemy. Removal of even the pretence of a Saddam-led resistance is likely to facilitate greater convergence between these various groups and the Ba’athists now released from a charismatic relationship with a hidden leader. Many among the Shia who have been on the sidelines shall be less fearful of the restoration of the Saddam regime and may cooperate with the armed resistance more closely. Saddam was a symbol; his arrest shall demoralize some, energize others. In the meanwhile, the arrest of Saddam deprives the imperial occupiers of their last fig leaf. They gave all sorts of reasons for their invasion and occupation, all of which were transparently false; the very last one was that they were liberating Iraq from Saddam. Well, he is now in their custody. Why are they still in Iraq? And, as the resistance continues and grows, they can no longer pass it off as ‘Saddam loyalists’, Ba’athist ‘remnants’, etc. With Saddam in captivity and the occupation getting more and more ferocious, the emperor is naked – cannot find his clothes, not even his fig leaves.

Just as the US failed to garner even a semblance of backing in international law for its invasion of Iraq, it dare not put Saddam on trial in a court that has international jurisdiction. It has too may skeletons in its own closets. So, it will prefer to go on ‘interrogating’ and will then prefer to arrange for a quick trial and an even quicker execution. Donald Rumsfeld said on TV that Saddam shall be treated as a war prisoner and in accordance with the Geneva Conventions. Why then does he not have immediate Red Cross protection and access to legal aid? By what right does the US hold him in an undisclosed place while he gets infinitely ‘interrogated’ by CIA and Co.?

One of course wishes that the democratic forces in Iraq had managed to kill Saddam a long time ago; the world would have been the better for it. Under the circumstances, though, it is perhaps all for the good, possibly for the wrong reasons, that Saddam did not kill himself. And, as resistance to imperialism unites more and more Iraqis, real democratization of Iraq may yet come about in consequence of this invasion, not as a gift of the Americans, but in the form of a popular unity and uprising against them.