Facts of a ‘dirty war’: An excerpt from 'The Dirty War in Kashmir' 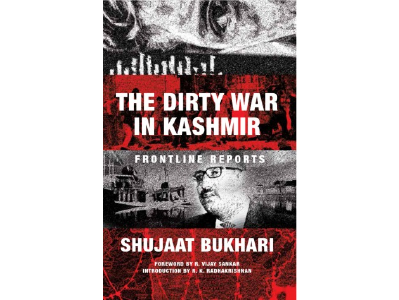 This is an excerpt from our new Shujaat Bukhari book  The Dirty War in Kashmir: Frontline Reports. Shujaat Bukhari was one of the most vital, balanced and well-informed voices in Kashmir. Perhaps for this reason, the 50-year-old journalist was shot dead by motorcycle-borne gunmen in Srinagar on the evening of June 14, 2018, as he was leaving the office of Rising Kashmir.

This excerpt is from his Frontline report "Facts of a 'dirty war'" published on July 07, 2017 where he statistically analyzes the resurgence of militancy in Kashmir and state's reaction to this resurgence. This report is pertinent in the wake of the encounter of Mannan Wani, a research scholar who joined Hizbul and valley's boycott of urban body local polls.

In 2015, a picture showing 11 Kashmiri youths posing with AK- 47 rifles went viral on social media. Standing in the centre of the group was their inspiration, Burhan Wani, who changed the complexion of the militancy in Kashmir and reignited the anti-India movement even at the people’s level. When he was killed in 2016, Kashmir erupted in an unprecedented unrest that locked down normal life in the Valley for about six months. Nearly 100 people, mostly young, were killed, thousands were injured and scores were blinded with pellets. It was a new Kashmir: this time people did not hide their emotions and rallied behind the militants.

On the face of it, Burhan Wani’s death did not faze the Hizbul Mujahideen, the indigenous militant organization that had made a comeback after over a decade. The group that rallied around Burhan Wani had been hit by the loss of cadre and affected by the preference Pakistan gave to organizations dominated by foreigners. Getting the local people to join the ranks of the organization apparently led to ‘popular’ support for militancy in general. Security managers in the Valley were taken aback in October 2015 when over 30,000 people turned up for the funeral of Abu Qasim, a Pakistani who led the Lashkar-e-Taiba in Kashmir.

Of the 11 young faces in that photograph who gave impetus to militancy in south Kashmir and attracted more youths into their organization, nine have been killed. Sabzar Ahmad Bhat, who was the dirty war in Kashmir a close confidant of Burhan Wani, was ninth in the group to be killed. His journey was also one that owed much to atrocities committed by the security forces. He was motivated to join the Hizbul Mujahideen after Burhan Wani’s brother Khalid Wani was killed by the Army in the forests of Tral in 2015. Khalid Wani was not a militant but had, presumably, gone to see his brother. Though Sabzar Ahmad Bhat was picked to succeed Burhan Wani, he refused, paving the way for Zakir Musa to become the head of the organization. Musa recently stirred a controversy when he announced that his organization would hang Hurriyat leaders for talking about a solution to the Kashmir problem that was not based on religion. As the outrage against his statement from the average Kashmiri became palpable, he modified his words, sparing Syed Ali Geelani.

Another member of the group, Tariq Pandit, has surrendered, and only Saddam Paddar is still free. Like most new recruits, the 32-year-old Paddar had never crossed over to Pakistan for arms training and had been charged with stone-pelting before he joined the organization. He hails from the highly volatile Shopian district and is now seen as a possible candidate to head the Hizbul Mujahideen in the Valley since Zakir Musa’s ‘fate’ is not known given that the organization, which operates under supreme commander Salahuddin in Pakistan, has also distanced itself from his views.

Notwithstanding the fact that the Hizbul Mujahideen suffered two successive major losses in 2016 and 2017, it still has the highest number of militants in its ranks. In south Kashmir alone, according to official sources, there are 112 militants, 99 of them locals.

The biggest cover the militants have is the people, who give them shelter and food and even help them escape from the security forces. Over a decade ago, local support to militants had waned and that was why their numbers had dramatically gone down.

Today, the people of the Valley support the militants openly and it is obvious when people throw stones at the security forces during operations and come out in large numbers for their funerals. The practice of holding a shutdown when militants are killed is also back, and the Joint Hurriyat is finding it difficult to avoid it lest its leaders invite the wrath of the people.

Going by official figures, 282 militants are active in Kashmir today. Compare this with how deep-rooted militancy was in the mid-1990s, and one wonders what makes today’s armed resistance so powerful that it gets the full attention of New Delhi’s security establishment. A hysteria has been built up around the new-age militancy by both the security establishment and the national media (mostly TV channels), and their provocative approach is pushing more people into the ranks of militancy. Take, for example, Chief of the Army Staff General Bipin Rawat’s defence of the use of a Kashmiri man as a human shield and his description of the situation in Kashmir as a ‘dirty war’ that needs an innovative approach. This raises questions about the state’s ability to deal with a situation when similar situations were handled without such fanfare in the mid-1990s. No doubt, the dynamic of public support has changed, but it is a ‘war’ that is being waged in Kashmir. Defence Minister Arun Jaitley recently said that there was a ‘warlike’ situation in Kashmir and General Rawat talked about treating stone-pelters on a par with militants.

Even as it appears that Kashmir is lost to militancy and the hardline approach is to ‘crush’ it, the scene is very different from what it was in 1996. Looking at what the Government of India told Mehbooba Mufti in reply to her question in Parliament in 2014, a comparison with the situation in 1996 seems out of place and also ridiculous. On August 8, 2014, she asked ‘whether the number of militants operating in the State of Jammu & Kashmir has decreased since 1995 and whether the government has any proposal for the withdrawal of security forces for the civilian areas of the State’. In response, the Home Ministry said that the number of militants operating in the State of Jammu and Kashmir had considerably decreased since 1995. ‘There were 6,800 (approx.) militants of different tanzeems active during the year 1996 in the State which has, however, reduced to 240 and 199 in the years 2013 and 2014 (January), respectively.’ However, a former commander of a militant group says that the number of militants operating in 1995-96 might have been around 8,000 to 10,000.

According to official data, in 1995, around 4,390 militants were arrested and 1,332 were killed. In 1996, about 3,453 militants were arrested and 1,332 were killed. The highest number of militants killed was in 2001; a total of 2,421 were killed and with it militancy started declining. As 9/11 changed the world view about the Kashmir insurgency and Pakistan began to be engaged on the Afghanistan front, the number of infiltrations decreased so much so that the Army described 2015 a zero-infiltration year.

Apart from the support they seem to be getting from the general public, today’s militants seem more committed than those who became militants in 1990, when all roads led to Rawalpindi. In most cases, a militant today has actually graduated from being a stone-pelter first. To begin with, the space for stone-pelters opened up because of the vacuum created by the absence of political engagement to address the larger issue. And the way the police have gone after them has consequently herded them into the ranks of militants.

With a bigger symbolic loss, the Hizbul Mujahideen may find it difficult to move on, though it has the numbers. But as long as people rally behind it, it will continue to make the state uncomfortable; two attempts by the Army to corner its members in Shopian backfired since the Army feared collateral damage. South Kashmir becoming the capital of militancy is the result of many complex realities, and pushing people to the wall on the political front is one of them.

But south Kashmir is also in the news because the militants themselves choose to be seen in public through social media. Burhan Wani became a poster boy for the militants as he repeatedly used social media though, as a senior police officer wrote soon after his killing, ‘he had not fired a single shot’. Compared with the south, the situation is grimmer in the north, where there are, according to the police, 141 active militants, of whom 118 are foreigners and 23 locals. They, however, stay away from social media and do not hype up their presence. That is the stark difference between militancy in the north and in the south.

Whether the government can afford to use the stick alone to end the current phase is difficult to say, but more than any action of the government it is the ‘war’ as it is portrayed by TV channels that is causing more damage on the ground.