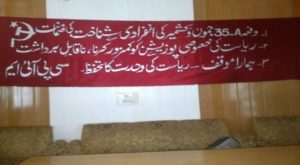 Very few people know that the red flag of the Communist Party of India (Marxist), CPIM, staunchly defends the people’s rights against the police and military excesses here and also is a beacon to combat the designs of secessionist elements in Kashmir valley. In the state, the CPIM is a small party, which has only one MLA - Mohammed Yousuf Tarigami from Kulgam. Nonetheless, the party has faced great violence here, which is little known outside the state. Nearly fifty comrades have been killed by terrorists who are part of one faction or the other. Not one party member of the BJP has been killed here.

In Kulgam, the party has an office that doubles as a residence for half a dozen families who are part of the party. They have received severe threats from various terrorist groups. Some of them share their tales of having been shot, lost limb, survived and now work from this urban center at Kulgam. Abdul Hamid Wani, Nazir Ahmad, Master Gulam Moiudeen are a few amongst them who have heroic tales to narrate.

The CPIM - in such a difficult and hostile environment - keeps the flag aloft. It raises its voice to call for democratic demands and to fight against the excesses committed against the people by the police and other central security agencies in the name of fighting terrorism.

On 31st August, just two days before the ‘Eid’, the largest festival in the valley, a political demonstration was held in the town in which over 300 people participated. This was against the nefarious designs of the BJP government which tacitly through a petition in the Supreme Court is trying to scrap section article 35A of the constitution of India. This section has a great relevance for the identity and culture of Kashmiri people. In Himachal Pradesh too, there is a similar section for the protection of native people rights with respect to their identity and land.

The Party works in difficult conditions, including the threats to the life of our activists. But it is also difficult to mobilize people in such an environment to take up democratic demands. The activities do not end there. It is not enough to say things are difficult. Much is to be done.

On the evening of the last day of August, calls began to come to the Party that nine boys had been detained by the Army; later it was said that they had been detained by the notorious special operations group of the police (it has technically been disbanded, but seems to operate anyway). The boys came from a village called Okey. The arrest of the boys, we learned, is part of the ‘normal’ and ‘routine’ harassment of the population by the security services. Apparently, these nine boys had resisted a military operation that took place some days before the arrest. No sense in going into the merits of the indictment against them. Suffice it to say that several of these boys were under the age of 18. They were mainly part-time workers and daily wage workers. The land that they owned was minuscule, not more than 500 square meters. They were mainly non-agricultural daily wage workers.

The boys were destined to spend a few days in the police lock-up without even the presence of bringing them into a court. This is allowed by the draconian provisions that exist in Kashmir Valley. Unlawful detention is a normal part of life in the Valley. Families have to bribe the Army and the police to get their family members released. Democratic voices are weak here.

Mohammed Amin, the leader of the Party, went to the police camp and resisted the detention. He said that the Party would conduct a major protest if these boys were not released. This was the eve of Eid. Such highhandedness would not be tolerated by the people. Comrade Amin threatened to not move till the boys were released. The boys were released by 11 pm. Their parents - waiting outside - greeted them with relief and joy. Many women came and kissed Comrade Amin on the forehead, saying that they owe their day to him.

It is common in the Valley to hear talk that ‘normalcy’ can only return with the PDP-BJP alliance government collapses. This government continues to alienate people. The people say that they voted against the BJP and feel betrayed by the PDP going into alliance with the forces of communalism. The BJP’s politics and culture of hatred aggravate the dissensions and escalate tension. This may sound quite naïve but the reality is that BJP is seen as anti-Kashmiriat and every minute of their rule is seen as alienation. The use of the State apparatus is seen as selective in its choice of targets. The Doval Thesis - ‘not to do anything’ and to let the Valley burn - is seen as very problematic. There is no dialogue in the Valley or with Pakistan. The Centre has abdicated all responsibility. Hope is in short supply in Kashmir Valley.

During Eid, the comrades in Kulgam stay in the office since they cannot go home. They work hard to bring democracy to Jammu and Kashmir at the expense of their own lives. The active work of the MLA and of the party in the district has been able to bring some hope to the people. There is infrastructure being developed - a 200-bed hospital, a large college, good roads…. I remember reading The Village Against the World by Dan Hancox about the communist mayor of a small Spanish town called Marinaleda. He carries the red flag aloft while surrounded by callousness and greed. Much the same could be said of our comrades in Kulgam. Theirs is a district against the world.

Tikender Panwar is a member of the State Secretariat of the CPI (M) from Himachal Pradesh and was the Deputy Mayor of Shimla.