Erdogan’s Dream and Our Struggle: An Interview with Burhan Sönmez. 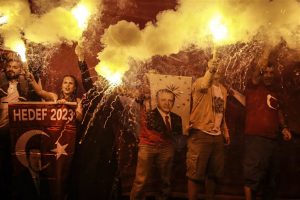 On June 24, Turkey voters decided in the favor of Tayyip Erdogan and his Justice and Development Party (AKP) in both the presidential and parliamentary elections. The elections were called in advance and came after the narrowly approved referendum last year which gave enormous powers to the President and abolished the post of Prime Minister. Erdogan's AKP Party also secured a majority in the Parliament with its allies although its vote share got reduced from the last elections. Vijay Prashad and E. Ahmet Tonak, writing for The Hindu analysed the elections results, the aftermath and the extraordinary circumstances that the elections were held in.

According to Amnesty International, the elections took place in a "climate of fear". The media dedicated a majority of its reporting to Erdogan's campaign. At the same time Selahattin Demirtaş, the presidential candidate for the People's Democratic Party (HDP) had to run his campaign from prison. Despite a strong support in his election rallies, the challenger to Erdogan, Muharrem İnce of the Republican People’s Party (CHP) could manage to secure only 30% votes, thus failing in taking the fight to the second round.

Erdogan supporters celebrating after the win

Burhan Sönmez, the Turkish novelist, wrote in our book 'Strongmen: Trump-Modi-Erdogan-Duterte' a fable on the Turkish President Tayyip Erdogan. We did a short interview with him on the results of Turkey Elections along with an excerpt from his fable on Erdogan in our book.

With the post of Prime Minister abolished and a weak Parliament after the referendum, how do you see this election victory for Erdogan?

Erdogan’s dream has always been to get rid of parliamentarian democracy and create a one-man-ruling system for himself. Now he has managed to clear the way with the support of half of the public.

What do these election results mean for the opposition parties such as CHP (People's Republican Party), its allies and Kurdish HDP (People's Democratic Party)?

Opposition acted wisely during this election. They ran separately to weaken Erdogan’s party from different aspects. The aim was to keep Erdogan’s votes below 50% and then to unite against him in the second round which was supposed to be held in two weeks times. But Erdogan managed to cross the line by a little margin, he got 52%.

You wrote in your essay on Erdogan that Left-wing groups and parties, trade unions, intellectuals etc. have been the most determined in the opposition against Erdogan but since they are divided among themselves for different reasons, it has been advantageous for Erdogan. The election campaign saw huge turnouts in rallies of the opposition leaders. Where did the campaign go wrong?

That is the point. Anti-Erdogan initiatives are strong, they got mobilized well. But they are not capable of entering in the public spheres where Erdogan gets his support. The problem in Turkey is that our society is now divided with high walls it is so difficult to cross these walls. One half does not have influence on the other half. The opposition may well be organised, that is one thing, but now one more thing is needed that is to explore on the public fields where Erdogan get fed.

What is the way ahead for 'Progressives' in Turkey?

There is no need to lose hope. Struggle for freedom is a long run. The opposition parties and groups should support each other as they did recently and find ways of touching different layers of the society who are under the influence of Erdogan’s religious and nationalist discourse.

Keep on
Struggling,
Creating and
Flourishing life...
Keep on...
I believe in myself and people like me.
It is not in vain to hope for well-being.

An excerpt from Burhan Sonmez's fable on Erdogan

When Erdoğan started to run for office in 1994, he took off his wedding ring from his finger. He held it up to the people during a speech. ‘That is my only wealth,’ he said in front of the press. Five years later, in 1999, he stated, ‘If some day you hear that Tayyip Erdoğan has become so rich you should consider that he has committed sinful things.’ This was the year when he ascended to the peak of his fame as a victim. Erdoğan was convicted by the Turkish state for reciting a poem during a rally. The poem, written by Turkish nationalist Ziya Gökalp a century before, was said to be changed from its original by Erdoğan; he added in some extra elements.

The mosques are our barracks

The domes our helmets

The minarets our bayonets

And the believers our soldiers.

At that time, Erdoğan was the mayor of Istanbul. Reciting the poem got the attention of the secular-sensitive judiciary. Having been sentenced to ten months in prison, Erdoğan served four months in jail. The prison was not a prison. It was a prison in name only. They had converted it into an office for him. He had a secretary in the prison with him. The secretary’s name is Hasan Yeşildağ, who deliberately committed a small crime in order to get into prison and welcome Erdoğan. They prepared a special ward for Erdoğan. It had a television, a fridge and a sofa. Visitors came daily to see him. National and international luminaries came to see him. Their interest suggested that they saw him as a figure of political promise for Turkey.

When Erdoğan left prison, he did not wait long to depart from his political party, which was saturated in traditional Islamist discourse. Erdoğan had learnt a lesson. Not to abandon Islamism, but to walk away from its traditional – and marginal – form. He said he had changed, but he never pointed out what parts of his ideology had changed. These were the years of turmoil for the Turkish economy and for Turkish politics. Erdoğan met with international celebrities, such as George Soros, and with elected officials from the United States. He was seen as a moderate Muslim leader who could provide a positive example for the Middle East. In 2002, Erdoğan’s newly-formed political party – Justice and Development Party (AKP) – won a surprising victory in the elections. It won 34% of the vote and – because of the system of Turkish politics – 66% of the seats in the parliament. Erdoğan had the complete support of almost all Western governments and the European Union. He was seen as a symbol of change and moderation as well as a bridge between cultures – the cultures of the West and Islam.

When the Constitutional Court investigated the AKP in 2008 on the allegation that it had breached the secular basis of the Turkish Republic, none other than Queen Elizabeth II of Great Britain paid an unexpected visit to Turkey. She was a guest of the Turkish President – Abdullah Gül – Erdoğan’s man. The visit was interpreted as support of the West for Erdoğan and his government. Two months after Queen Elizabeth’s visit, the Constitutional Court rejected the proposal to close the AKP. The vote in the Court was close – six judges won over five. Four of the five judges who voted to close down the AKP said that the party was at ‘the centre of anti-secular activities’. It was of no consequence. Erdoğan got away with it, backed by the West.

Erdoğan sees himself as the victim. He has pushed for and supported the fabricated and politically motivated cases against journalists, army officers and dissident politicians over the past few years. But their problems are not his. ‘Where were you when I was sent to jail?’ he asks plaintively when he is asked about the detention of the dissidents. Everyone can be victimized, but Erdoğan is the one and only real victim. It first appeared that he was playing a political game. But now it seems that this is Erdoğan’s genuine sensibility. He truly thinks of himself as the victim. Erdoğan, the Victim.

Erdoğan does not care about those who are not on his side. In 2011, he visited a small town in north-eastern Turkey. The locals protested the government’s anti-environmental policy, which had terrible effects in the region. The police acted with violence against the protestors. A school teacher was killed. Erdoğan was asked about this during a live television programme. He neither showed remorse nor expressed any sadness about the death of the school teacher. No one could be named a victim while Erdoğan himself was a victim. After nearly two decades, Erdoğan read the same poem again that was the reason for his imprisonment. This time no official body opposed him. Official bodies – such as the police, army, judiciary, universities, and media – are now on his side. There is no one left to defy him.

This is a snapshot of where our story begins and where it has now ended.