Communist Prints: Sidenotes to the Asian Women’s Conference of 1949 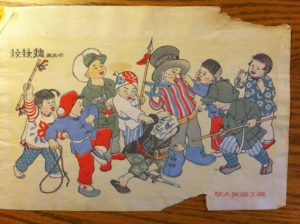 The paper caught my attention. The pictures slipped into my fingers from the archive file. The paper was fine and strong, with a subtle texture and sheen. It felt as if it were made of silk.

Three of the brightly colored woodblock prints shared the same paper. All featured peasant women were reveling in the benefits of communism. The images suffered from mild water damage. This blurred the writing and spread a pink wash of watercolor paint over parts of the image. The stories they tell, however, are undimmed.

One woodcut depicts the gains of communist land reform and women’s new rights to the property. Another portrays a literacy class for women and children run by a communist party cadre. A third woodcut shows rural women and men voting in elections. All of these pictures celebrate the work and dreams of rural women. All portray the dynamic physicality of peasant women taking hold of their future.

Hand-written translation at the back of the print:

“We have our land certificates – we must increase production. Better days are coming!”

These woodcuts were exhibited in December 1949 at the Asian Women’s Conference, held in Beijing - only two months after the victory of the Chinese Revolution and the formation of the People’s Republic of China.

One of those foreign guests was the American communist Betty Millard (1911-2010). Millard worked for WIDF in Paris between 1946 and 1950. She went to the conference as part of her work at WIDF.

In her diary notes, Millard writes about the incredible art exhibit that she saw and of meeting Yen Chien of the National Art Academy. Millard procured several of the woodcuts. That is how I chanced upon them in her collection, which is in the Sophia Smith Archives in Smith College (USA).

The woodcuts are part of the revolutionary Yan’an print movement developed under the leadership of Lu Xun during the 1930s and shaped by Jiang Feng in the 1940s. The revolutionary artists of the Yan’an print movement sought to transform a rural art form, woodblock prints, and the popular nianhua or lunar New Year’s drawings for two new purposes. The first purpose was to lift the spirits of the soldiers who were then fighting in the northern Shaanxi Province. The Lu Xun Arts Academy (formed in 1942) created a troupe to bring their artworks and plays to the troops. The second purpose was to counteract the development of pro-Japanese propaganda. The Japanese formed ‘Pacification Teams’ that used Chinese folktales and rural art forms (particularly woodblock prints) to make art in support of the Japanese occupation of China.

The Lu Xun Academy Woodcut Troupe experimented with black-and-white forms and more subtle uses of tones through chiaroscuro, to create a popularized artistic mode for pro-Communist propaganda in the struggle against Japanese occupation. The use of bright colors in woodcuts developed in the 1940s to appeal to rural audiences.

The Yan’an print movement for a national form of proletarian art gained momentum after Mao Zedong’s ‘Talks at the Yan’an Forum on Literature and Art’ in 1942. Mao noted that ‘the thoughts and emotions of our workers in literature and art should become one with the thoughts and emotions of the great masses of workers, peasants, and soldiers.' Mao’s message supported revolutionary artists’ experiments. For instance, Chen Bo’er, a revolutionary film director dedicated to communism and women’s liberation, developed an artistic practice in Yan’an so that 90 percent of her actors came from the working-class and the peasantry. She gave them the power to change lines or scenes to better represent their life experience. Zheng Wang, the author of Finding Women in the State: A Socialist Feminist Revolution in the People’s Republic of China, 1949-1964, contextualizes Mao’s remarks,

The Yan’an Talks were by no means a monologue singularly produced in the great leader’s mind for the purpose of controlling Party members and harnessing artists’ creativity, but rather Mao’s theorizing of Communist cultural producers’ innovative practices. He cogently articulated a vision of cultural revolution that had long been shared among revolutionary artists such as Chen Bo’er.

Another print Millard brought to the United States was by a woman artist, Feng Shin, from Canton in South China. The production of this print illustrates the dialogic artistic process developed in a film by Chen Bo’er. The print, titled ‘Children’s Play,' was based on the children Feng Shin witnessed in Hebei province while working for land reform in the region. After she watched them enact the confrontation with a landlord, she saw that their ‘little faces revealed a deep hatred for the landlord’s exploitation.' She later asked children to enact the play of China’s fight for independence, and created characters such as Uncle Sam with his military planes and the Guomintang with their Nazi allies.

These prints tell a story about women after the victory of Chinese communism over the Guomindang, Japanese and American forces. They seek to tell a story about women’s emancipation. With the exception of “Children’s Play,” they are not from the southern region of Yan’an, but from Northern China. They use brilliant color, with red used to emphasize the vibrancy of rural women and rural children. The color bleeding is most often of the reds, and only sometimes the blues of the padded coats synonymous with the communist party cadre.

Another print depicts a literacy class. Millard penned in translations, titling it as ‘Learning Lecture’ and the writing on the board, ‘We are not going to be blind anymore.' Wang Zheng reminds us that literacy classes taught women to read, but they also opened doors – or in the title of this print, opened eyes. Women learned about their rights, including the new Marriage Law.

Another print is called ‘Bean Election,' by Gu Cun from the Masses Art Society, and shows a voting scene in of Dahecun village in the northern province of Hebei.

The voting site lies within a ruined temple. Nearby is a village school. On the poster boards are the names of the candidates. As with the other prints, Millard provided translations. ‘Vote for the best candidate!’ Reads the banner. The bustling scene centers on a woman in a red shirt dropping her bean in the cup of her candidate. Children also play active roles, with a child in blue seeming to urge on the man in a brown coat. Fully engaged in the civic process, a girl with a baby on her back talks to a man sitting on a stool. An old woman balances on a stool to better point out the candidates’ names to voters.

Perhaps even more than the nianhua about land reform, the story told by this image is one of civic leadership as power, and of self-determination. Again, women are at the center of this story, running the election and voting by dropping a bean in the cup for their candidate. The table that holds the cups in the center front of the image is a repurposed temple altar. The future is built on the past, but only to bring that past into new use.

The inclusion of these pictures of peasant women in the People’s Republic of China in Betty Millard’s repository has another significance in the formation of women’s anti-imperialist solidarity during the 1940s and early 1950s. As early as its opening conference in Paris, 1945, WIDF members from North Africa, West Asia, and India urged the organization to take leadership from women fighting for the end to colonial rule.

One month before the Asian Women’s Conference, in November 1949, the WIDF held its executive council meeting in Moscow before boarding the train with delegates heading to the conference. The 1949 meeting resolution stressed the centrality of peasant women, and ‘called for the strengthening of work in the countryside, among peasant women and women farm laborers, to be more active in defending their economic and social rights and to draw the women of the countryside into the common struggle of the working people against poverty and the threat of war’. The voices of Asian women, as well as the women from North Africa, West Africa and East Africa who attended the conference mirror the pictures Betty Millard brought back with her.

Soong Ching Ling specifically addressed Asian women on the second day of the conference, ‘If you are in liberated land and territory, we say to improve your country and your position in it. If you are still counted among the oppressed, we say struggle to organize and then ARISE!” The struggle against colonial occupation sought palpable gains vividly shown in these woodcuts – of land, of rights, of skills, and of another more just future to break from an oppressive past. Rural people were critical to the success of this vision.

On the last day of the conference, Celestine Ouezzin Coulibaly, a guest from Ivory Coast expressed her solidarity, ‘from my distant forest on the Ivory Coast to salute the Chinese victory in the name of the millions of black women who, back in my country, are dreaming of liberty.' As she spoke at the podium, a Chinese woman ran up from the audience and threw her arms around her. The aspirations for an Asian and African women’s movement closed the conference in that embrace.

Elisabeth B. Armstrong is the author of the Gender and Neoliberalism: The All-India Democratic Women’s Association and Globalization Politics (2013), a social history of AIDWA, and of the essay on Indian peasant women and communism in the first volume of Communist Histories (2016). She teaches at Smith College, Northampton MA, in the US.