Blue and Red Flags for a New Era of Struggle 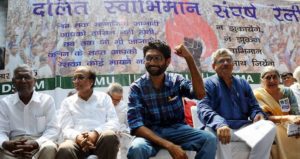 September 16 was an important day in the attempts by the Communist Parties to forge closer links of solidarity and joint struggle with important Dalit leaders and movements. The two-and-a-half years of the BJP-led Government have been witness to unprecedented attacks on the people of our country, on their livelihood, their jobs, their security, their access to education and health services and to their right to eat, think, speak and write as they choose within the parameters of civilized behaviour and norms. It is the Dalit and minority communities that have borne the brunt of their attacks.

These attacks while inflicting great injury and damage have also elicited the most widespread and aggressive response, a response that is gaining strength and depth even in the most unexpected of quarters.

These attacks have exposed the reality of the Gujarat Model like never before. The discrimination that Dalits face, their lack of access to ownership of land, to job security and to lives free from insult and violence has been revealed to all not only by statistics and public pronouncements but by the horrifying video of young, Dalit boys being brutally beaten for flaying a dead cow by self-styled Gaurakshak criminals. Perhaps even more horrifying than the violence inflicted on these young Dalits was the fact that it was the perpetrators who filmed their own criminal inhumanity and saw to it that it was widely viewed by millions of people.

The result was quite the opposite of what the Gaurakshaks and the rest of their Sangh Parivar members had intended. Far from cowering in fear, millions of Dalits and those committed to the struggle for social justice arose up as if to say ‘Enough’! The anger and resentment suppressed for centuries erupted in flames that seemed to melt fear and fire resistance.

Lakhs converged on the streets of Ahmedabad to shout the new slogan that emerged organically from the gruesome reality of their lives: Gai ki poonch tum pakdo, Hamein 5 ekad zameen do (You hang on to the Cow’s tail, Give us 5 acres of Land).Great numbers of people got behind this slogan, and the young leader – Jignesh Mewani – who emerged from out of the struggle. These lakhs marched the four hundred kilometers to Una. Left activists from the All-India Kisan Sabha, from the All-India Democratic Women’s Association and from the CPI (M) joined this march.

While this was the most dramatic of such actions it was not the first. The Chennai IIT administration obeyed the diktats of the new fountainhead of saffronisation-Brahminisation that came from the Human Resource Development Ministry and the Government of India – it went forward to ban the Ambedkar-Periyar Study Circle. The students in the Circle – supported by the Students Federation of India and the Democratic Youth Federation of India – fought back. The outrage at the University of Hyderabad over the institutional murder of Rohit Vemula exploded across India. The sea of blue and red flags that fluttered during the march in Mumbai after the shameful demolition of Ambedkar Bhavan. These preceded and led to the Una March.

The Dalit Adhikar Rally of September 16 on Parliament Street, Delhi, was an attempt to give cohesion and direction to this coming together of different sections fighting for a society based on equality and equal rights for all.

The significance of the rally lay not only in the crowds that gathered in front of the dais but also in the presence on that dais of Prakash Ambedkar, Jignesh Mewani, Radhika Vemula, Vimal Thorat, Bezwada Wilson, Paul Diwakar, PS Krishnan, Ashok Bharti – all of whom have struggled for years to end social, cultural and economic exclusion and exploitation – along with Sitaram Yechury (CPIM), Sudhakar Reddy (CPI) and leaders of the Dalit Shoshan Mukti Manch (DSMM), Kisan Sabhas and Agricultural Workers Unions.

The same evening, on his return from Delhi, Jignesh Mewani was arrested in Gujarat because he had the temerity to say that he and his comrades would oppose Modi’s birthday celebrations on 17 September. Modi, in fact, celebrated his birthday with the arrest of Jignesh in Gujarat and Khurram Parvez, a human rights activist in Kashmir.

The CPI(M), DSMM and other organizations took to the streets in Delhi, Mumbai, Lucknow, Gwalior, Bhopal, and Moradabad to protest these arrests and demanded the release of Jignesh and Khurram.

It must also be remembered that Modi’s birthday was also the day on which Mohammed Ayub (age 29), who had been attacked by Gaurakshaks, breathed his last in an Ahmedabad hospital.

Subhashini Ali, CPI-M Politburo member, is on the advisory board of LeftWord Books.