An India without the Left? 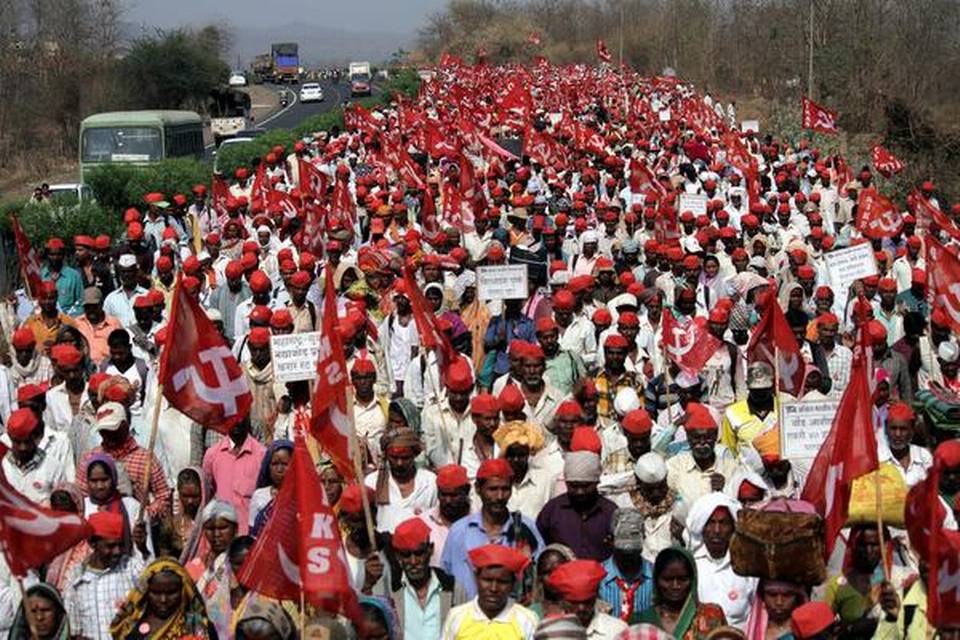 To understand the Left’s central role, one has to take stock of the mass mobilisations to highlight injustice and inequity

One out of every two Indians goes to bed hungry at night. That’s almost 700 million Indians. The number comes from McKinsey. But you don’t need a consultant to tell you about the distress in India. It is evident on our streets and in our fields. Agrarian distress (amplified by the suicide of farmers) and urban distress (illustrated by the growth of slums) have become normal. Policy from the Central government does not effectively address any of the challenges faced by over half of the Indian population. Deprivation and desolation set the mood. The emotional dial switches to anger ever so often.

The voices of peasants and workers, of Dalits and Adivasis, are muffled. Most political parties ignore them, making their appeal to the middle-class as if this class should set the terms for political decision-making. It is evident that the real beneficiaries of government policy since 1991 have not been this middle class, but it has been what should be called an oligarchy (10% of Indians own 75% of India’s social wealth). Centre-stage have been the interests of prominent business houses. Not the voice of Chinna Balayya (a farmer from Parigi Mandal, Andhra Pradesh, who killed himself) nor the voice of a 16-year-old girl from Gaya, Bihar who was killed in an honour killing, nor hundreds of lakhs of people like them.

Amplifiers on the street

The amplifiers of the voices of the farmers and the workers, the women and the Dalits are one section or the other of the organised Indian Left and of leftist movements. One often hears chatter about how the Left is anachronistic or how the Left is marginal. Yet, in 2018, the Left played a central role in hundreds of public actions by ordinary people whose extraordinary courage stunned the nation. It was the long march of the farmers of Maharashtra in 2018 that pushed a section of the urban middle class to acknowledge the suffering in the countryside and to welcome the marchers to the outskirts of Mumbai late on a Sunday evening. When the farmers realised that the next day an examination for students had been scheduled, they picked up their belongings and marched into the night to reach Azad Maidan. This sensitive gesture won the hearts of Mumbai. It is one thing to keep saying ‘farmers’, and another to say that the farmers came as part of the All-India Kisan Sabha, a mass organisation of the Communist Party of India (Marxist). Farmers suffer the agrarian distress in a relatively isolated way, and the suicide of farmers is an illustration of their solitary experience of sorrow. It is the organisation that takes this loneliness and makes it political.

Across India, over the past year and more, people agitated against the vicissitudes of capitalism and the failure of the government of Prime Minister Narendra Modi to address this turbulence. There was the agitation of the ASHA and Anganwadi workers, the workers and peasant march into Delhi, and the general strike in early January 2019 as well as other, smaller public actions. All of these were organised by trade unions and peasant and agricultural worker platforms of the Left. The Left and other left-liberal platforms — pushed by sensitive sections of the Indian public — fought against the dangerous cow protectors and the honour killing murderers. The most volcanic of these agitations were the cascading Kisan mobilisations by the Left mass fronts in Rajasthan. These protests, along with those in Maharashtra and the peasant march into Delhi, put agrarian distress on the table. They are what contributed to the churning of political fortunes in the three Hindi-speaking States — Rajasthan, Madhya Pradesh and Chhattisgarh — where the Bharatiya Janata Party (BJP) was defeated in the Assembly elections last winter. That the Left was not able to convert these mobilisations into more seats for Left candidates is a sad commentary on the Indian electoral system — where caste and other sectarian affiliations, as well as sheer money power, determine the outcomes.

A pall of gloom descended on the country after the disaster of demonetisation and the goods and services tax, after the daily reports of lynching and communal mobilisations, after the ghastly anti-science drift of intellectual institutions, after brutish language began to define public discourse. Meanwhile, in Kerala, the Left Democratic Front government provided an alternative discourse and practice. Small gestures of care were offered to break the rigidities of culture. The government provided free sanitary pads for schoolgirls in government schools, so that they would not feel the social penalty heaped on women for menstruation. Transgender rights came into focus, with some of Kochi Metro’s ticket collectors being recruited among the transgender community. The divisiveness of the Rashtriya Swayamsevak Sangh was consistently fought by Kerala’s incomparable Chief Minister, Pinarayi Vijayan, and his fellow Ministers.

Then came the massive flood that swept through the small State. Central government aid was paltry and slow. It was a reflection of how parties like the BJP tackle tragedy. Relief and rehabilitation, particularly for the poor, takes ages. When we travelled recently across the length and breadth of Kerala, in cities as well as the countryside, it was hard to imagine that the State had been ravaged by ferocious floods. A large part of the credit goes to the people of Kerala and the culture of public action in the State. They organised themselves in myriad, more or less spontaneous ways to help each other. The courage of the fisherfolk who ventured into the waters with no regard for their personal safety is one example. There were so many others.

Coupled with this was the attitude and fortitude of the Left Democratic Front government itself. It plunged into rescue and relief in an absolutely non-partisan manner. This was contrasted with the attitude of the Modi government at the Centre, which sought to penalise the people of the State for the government they had elected. It is also in sharp contrast to the Hindutva organisations, which gave even this colossal tragedy a sectarian and communal colour.

Imagine if there were no Left in India. Would anyone pay attention to the voice of the worker and the peasant, the voice of the dispossessed and the frustrated? Would anyone amplify their dreams and desires, their aspirations for a good life? Who would take up the Supreme Court order to allow women into the Sabarimala temple, or go out on the street to form a Women’s Wall of lakhs of women? Who would stand for reason above division, social care above individual wealth? Years ago, Akbar Allahabadi sang, “You were people. With great difficulty you became human.” That ‘difficulty’ is the place where the Left lives. Without its efforts, would humanity survive?