Ahed Tamimi, The Freedom Theatre and 13 years of BDS Movement 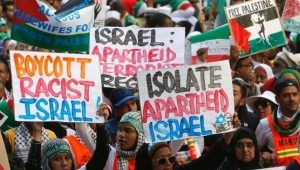 “I’m not the victim of the occupation. The Jew or the settler child who carries a rifle at the age of 15, they are the victims of the occupation. For me, I am capable of distinguishing between right and wrong. But not him. His view is clouded. His heart is filled with hatred and scorn against the Palestinians. He is the victim, not me. I always say I am a freedom fighter. So I will not be the victim….The resistance continues until the occupation is removed.”- Ahed Tamimi

In December last year, a video surfaced in which a 16-year old Ahed Tamimi was kicking and slapping an Israeli soldier outside her home in Nabi Saleh, a small Palestinian village located 20 kilometers northwest of Ramallah in the central West Bank. Filmed by her mother, Ahed's reaction in the video came after she saw the same soldiers "shoot her 15-year-old cousin Mohammed in the head with a rubber bullet that same day." As the video went Viral, Ahed Tamimi was arrested by the Israeli police along with her mother Nariman Tamimi and her cousin Nour and was charged with 12 counts of assaults, incitement, interference with soldiers and stone throwing. For Palestinians and people who are resisting the brutal Israeli state, Ahed became a symbol of resistance for her act of bravery.

This wasn't the first incident when Ahed resisted Israeli soldiers. When she was 11, in a gesture that went viral and caught everyone's attention, Ahed waved her fist at a soldier. When she was 14, she bit another soldier who was holding her brother. After being in prison for almost nine months, Ahed was released on 29th of July. The day before she was released, Israeli b order police arrested two Italian men and a Palestinian for drawing a mural of Ahed’s face on the wall separating Bethlehem from Jerusalem. In both these cases, Israeli state wanted to show that it is them who control Palestinian lives and any word, or piece of art, or act of resistance against the settler colonialist model of the occupation of Israel won’t be tolerated. Ahed's case also brought to attention the illegal detention of Palestinian children by Israel's army and its police forces and the inhuman treatment meted out to them in interrogation and in prison.

2018 also marked the 70 years of dispossession of the Palestinian refugees. This year's Nakba commemoration, a day when Palestinians remember their ethnic cleansing by Israeli forces and destruction of their villages to occupy the lands inhabited by Palestinians for centuries, coincided with US's move to shift its embassy to Jerusalem. As the Palestinians protested in huge numbers to claim their right to return to their lands, they were equally furious at US's betrayal. During the protests, Israeli forces opened live fire at the protesters and killed 60 people while wounding thousands. This massacre of Palestinians happened at the same time when US President Donald Trump's daughter Ivanka Trump and her husband Jared Kushner were shamelessly posing at the opening of the US Embassy in Jerusalem. The murders of unarmed Palestinians led to widespread condemnation of Israel's actions.

It's been 70 years since Israel occupied Palestinian lands. Over these years, Palestinians worked to develop international solidarity and global support for their cause to apply pressure on Israel through non-violent means. An Academic and cultural boycott of Israel was one of these means. What started in 2002 in various countries as a call for a boycott of Israeli institutions, grew in next three years into a complete movement. On 9th July 2005, 170 Palestinian unions, political parties, refugee networks, women's organizations, professional associations, popular resistance committees and other Palestinian civil society bodies gave out a call for a boycott of Israel, disinvestment from Israel and international sanctions against Israel in support of the Palestinian cause. Popularly known as BDS (Boycott, Divestment, Sanctions) movement, it aims to force Israel to:

Omar Barghouti, who is a founding member of Palestinian Campaign for the Academic and Cultural Boycott of Israel (PACBI), wrote a book on the BDS movement. Titled 'Boycott Divestment Sanctions:
The Global Struggle for Palestinian Rights', the book "makes the case for a rights-based BDS campaign to stop Israel’s rapacious occupation, colonization, and apartheid against the Palestinian people." Inspired by the anti-apartheid campaigns against the racist rule in apartheid era of South Africa, the BDS Movement has been in action for 13 years. On July 9th, 2018, it completed 13 years. It has grown on to become a global campaign against the brutal, discriminatory and oppressive Israeli state. The initial call by 170 non-governmental organizations has taken the shape of a broad cultural, academic and trade boycott of Israel and will go on till it starts to respect the Palestinian human rights. For its non-violent and peaceful actions, Norwegian Parliamentarian Bjornar Moxnes nominated the BDS Movement for a Nobel Peace Prize this year.

In India, the BDS Movement has grown tremendously in last 13 years. In past few months, there have been successful instances of Movement’s intervention in the Boycott of Israel’s interference in the country. In a complete academic and cultural boycott of Israel, the Palestinian queers were joined by a cross section of LGBTQIA+ organizations in the boycott of the Tel Aviv International Film Festival. The open letter by various organizations affirmed the fight of BDS movement against Israel’s Pink-washing (cynical use of LGBTQIA+ rights by Israel to whitewash its crimes). After BDS Movement launched the Boycott HP (Hewlett Packard) campaign in India, it was joined in its fight by the Student Federation of India (SFI) on June 9th. With its strength of 4-million student members, SFI resolved to spread the message of the boycott of HP, a company which benefits from Israel’s occupation of Palestinians, across the campuses. This comes after the support of 16-million members strong All India Kisan Sabha to the Palestinian cause. In a statement released last year, All India Kisan Sabha pledged to support the “rights of the Palestinian people and to resist the corporate takeover of the Indian agriculture sector by Israeli companies.”

The current Indian government has grown closer to Israel with a brewing friendship between Indian PM Narendra Modi and Israel's PM Benjamin Netanyahu while ignoring the history of India's solidarity with the cause of Palestine. Both these leaders have much in common in their respective pasts and present if we look at their treatment of the people who they consider 'others'. It is in times like these in which Israel continues to grow more inhumane towards Palestinians, that the resistance needs to be intensified, the Israeli cheerleaders need to be identified and boycotted along with the boycotts of the state of Israel in every manner which is possible.